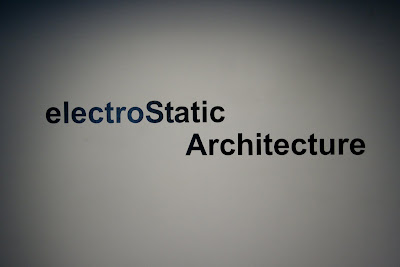 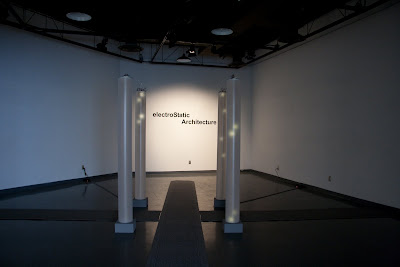 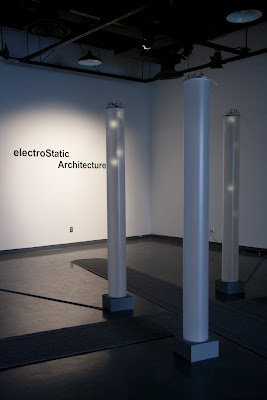 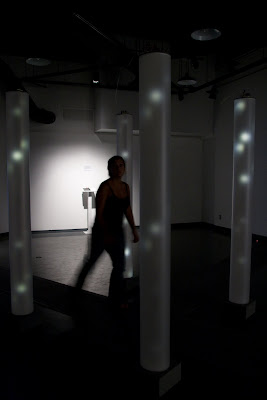 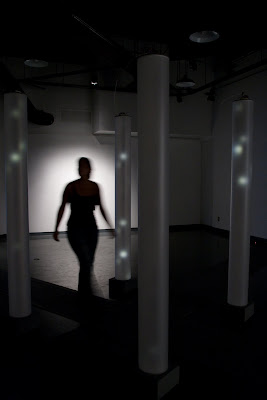 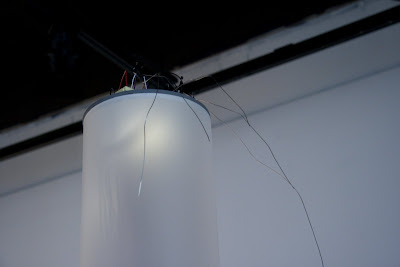 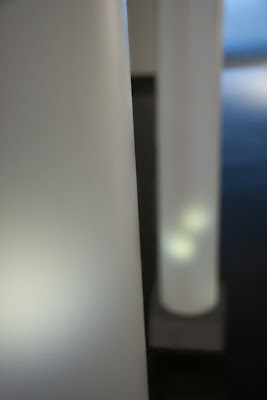 The first prototype of electroStatic Architecture appeared as a single row of four columns placed beside a doorway in the space, creating a confined walkway. Movement across the carpet successfully amplified the amount of static electricity carried by viewers. The electrostatic energy was also successfully picked up by the overhead antennas, which was then translated into light energy, dimming and brightening the pillars.

In preparing for the second iteration, the antenna design is being revisited to more effectively read and translate the static electricity into light energy. Additionally, expanding the number of pillars is under consideration to create a more immersing viewer experience.

Installation images are below: 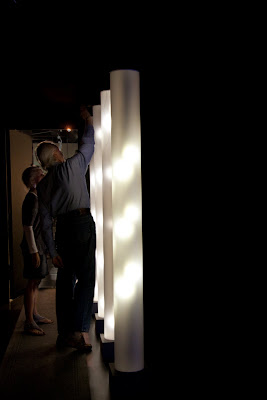 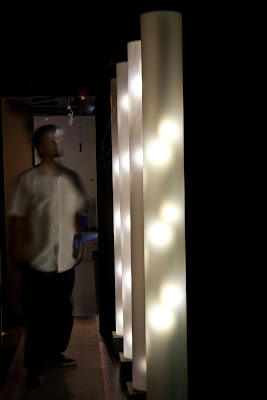 electroStatic Architecture employs the natural regenerative static electricity for interactive and responsive architecture. This project intends to show the accessibility of static electricity and one way in which this existing source of energy can be used to generate another useful and practical form of energy, as well as adding an expressive element to one’s architectural surroundings. With the amount of wasted energy in today’s world and the many ways we are trying to conserve and find alternate sources of energy, why not look to ourselves as a source? We are constantly collecting static electricity through every interaction between people and objects throughout our day. We don’t notice as it builds or when it transfers until it we feel or see it in the form of an electric shock. electroStatic Architecture utilizes the static electricity humans constantly collect and give off, translating the electrostatic energy into light energy embodied in the form of pillars reminiscent of ancient Greek architecture.

electroStatic Architecture offers an experience to any person within the space: an opportunity to become a part of the environment as if it were alive and aware of a human presence. The concept behind the interaction is based on a coexistent relationship between human and nature. The environment not only uses but also depends on the energy of humans to illuminate the area. Equally, humans depend on the response of the architecture to fully utilize and the surrounding area. electroStatic Architecture responds and encourages a relationship between human and architectural space. Upon first encountering the space a viewer may be surprised to find she is the determining factor in bringing life to the space, lighting up around her. The viewer is given a sense of power, as her presence determines when and how the environment reacts but also gives her the possibility to appreciate and observe the space and its unique qualities.

electroStatic Architecture intends to effectively use the static electricity found in our everyday environments as a power source, in this case to illuminate a pathway simply by passing through a space, creating an elegant solution to the search to alternative power sources.
No comments:
Home
Subscribe to: Posts (Atom)